The quality products from As Rías Baixas are carefully prepared to create delicious desserts, such as the traditional filloas or rosquillas as well as products of excellent quality and unique flavour such as the Galician honey. Besides these sweets, this region is also home to other natural delicacies, including various fruits such as apples or Mirabelle plums.

One of the most popular desserts in As Rías Baixas are the filloas, similar to the famous French crêpes, and traditionally made with flour, milk and eggs. You can also add pork blood to the dish, with a delicious result. Unlike crêpes, filloas are sweet and can be seasoned with sugar, honey or chocolate and even accompanied by quince or cooked chestnuts.

This typical dessert in Galicia can be tasted after lunch especially on dates such as Carnival or during the pig slaughter season (Saint Martin’s time). The filloas made in the parish of Valongo (Cercedo-Cotobade) are very popular. Moreover, they can be tasted in a food festival that has been celebrated for almost forty years.

The ingredients used to prepare the chulas, a typical Galician dessert very popular in the town of Pazos de Borbén and very similar to the filloas, are flour, eggs, milk and sugar. However, the difference is that the ingredients of the chulas are fried in plenty of oil. 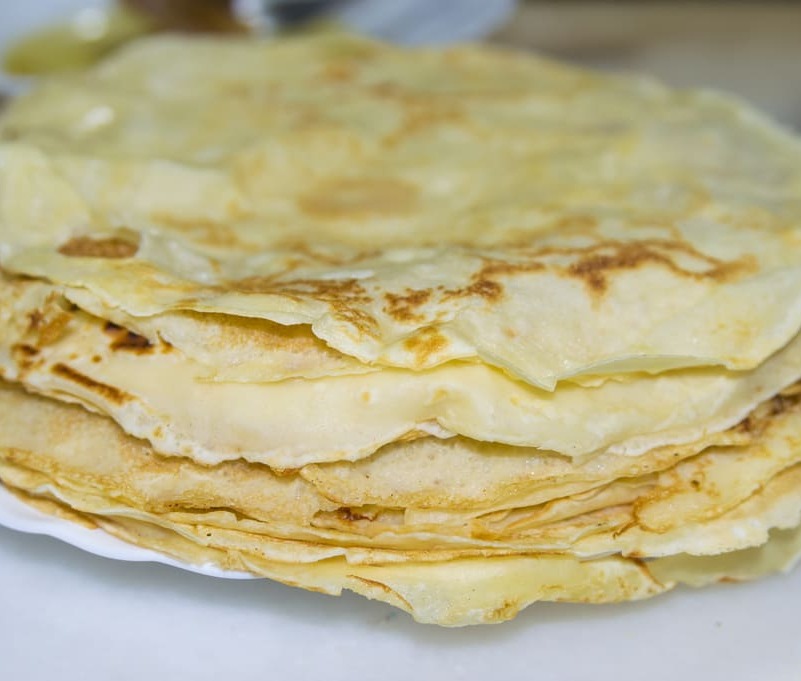 If the filloas are typical of the Carnival in As Rías Baixas, two other traditional sweets that are present in every popular event are the rosquillas (a type of doughnut) and melindres of Ponteareas, boasting more than one hundred years of history. Although in the beginning these artisan products were only sold in fairs, festivities and pilgrimages, nowadays they can also be found in pastry shops.

Silleda is the birthplace of these two desserts that are the stars of traditional Galician pilgrimages. The rosquillas from the parish of Abades have been handmade for more than a century, and very Easter Sunday, for the last three decades, the festival of the rosquilla has been celebrated in this village. The town of Gondomar is also famous for its rosquillas.

The Bolo de Pascua (Easter Bun), also known as bolo de ovos (Egg Bun), consisting of bread and baked eggs in shell, is made in the regions of O Salnés and Caldas during this season. It was a typical tradition of this time that the godparents would give their godchildren the bolo and the godmothers the rosca (a traditional sponge ring-shaped cake).

The roscón de yema (egg yolk ring-shaped cake) of A Guarda is an exquisite traditional sweet promoted in the mid-1960s by the bakeries and pastry shops of the region of O Baixo Miño. The dough of this delicious dessert is a spongy brioche filled with candied egg yolk. Very different, although they have the same name, is the roscón of Caldas de Reis. The ingredients of this typical sweet, whose preparation can last more than 6 hours, are sugar, butter, eggs and flour.

Finally, the so-called vincha or bandullo is a dessert typical of the region of Tabeirós-Terra de Montes that is about to disappear. It is made inside a pig bladder, previously inflated and cured, where a mixture of eggs, milk, cinnamon, lemon, walnuts, sugar, bread and butter is cooked. The description may be a bit of a shock, but the result is delicious.

The Galician honey is a natural and fresh product manufactured using traditional techniques since long ago. The mild and sea-influenced climate of As Rías Baixas, favours the growth of a rich and varied flora from which monofloral and multifloral honey are produced. Apiaries, usually small and artisanal, are looked after with loving care to obtain a high quality honey.

In the province of Pontevedra, in the hilly the town of As Neves, by the Miño River, or in the parish of Zobra (Lalín), in the O Candán Hill, an excellent honey under the Protected Geographical Indication ‘Mel de Galicia’ is produced. This sweet and exquisite delicacy can be accompanied by nuts or cottage cheese, popularly known in Galicia as requeixo, a very healthy typical dessert. In the town of Baiona, honey and walnuts are the star during the religious pilgrimage of Saint Cosmas and Saint Damian. 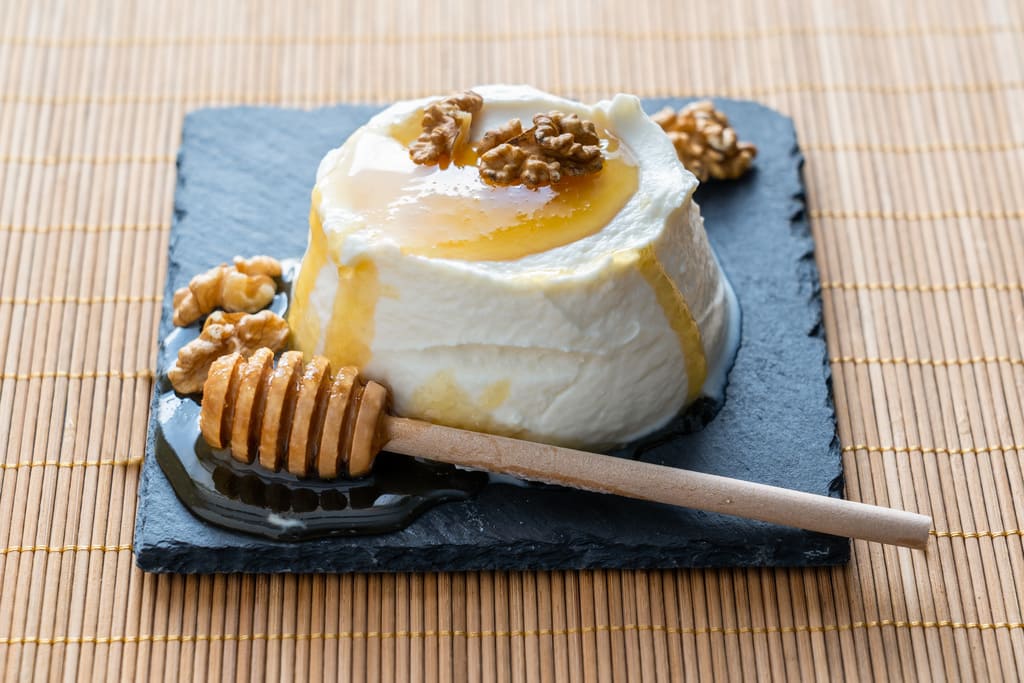 Requeixo (cottage cheese) with honey from As Neves

The bovine cattle living in the green fields of the inland towns of the province, raised in a free environment and fed with natural products, produce a unique milk, which is the main ingredient of the cottage cheese. It is easily manufactured in a traditional way, like the one of As Neves or of Cotobade.

The wide meadows and fields of the province of Pontevedra offer products that are a delight for the senses. Throughout this land there is a great variety of fruit trees that produce the sweets of nature: the fruits. In the north of the province, the town of A Estrada holds a long-standing tradition in apple and cider production, which dates back to the Middle Ages.

In the last years, the industry of apple and cider, the liquid gold from A Estrada, has recovered. Nowadays there are about 30 companies producing ecological cider. Manufacturers, both local and from nearby towns, gather the first weekend of June in A Estrada to celebrate the Cider Festival. 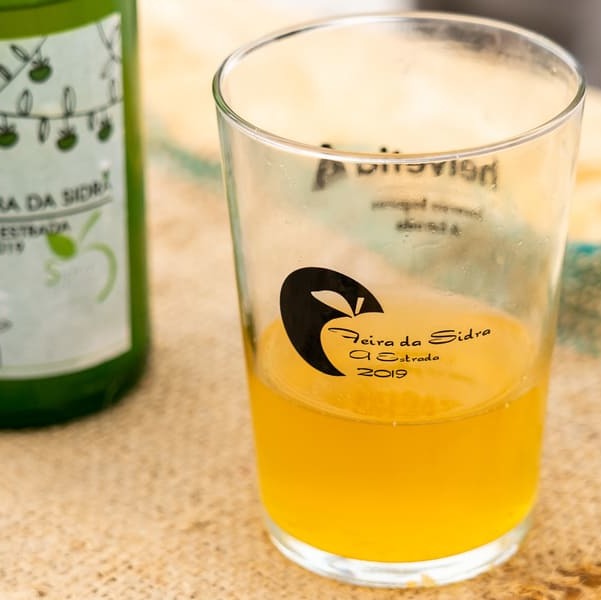 Apple production is also significant in Marín. This town in the region of O Morrazo boasts more than 30 types of local apples used for making cider. This large variety gives this cider a fantastic and very characteristic flavour. Moreover, at the beginning of October, on Saint Thomas Day, this town pays tribute to cider.

The cherry tree has become the symbol of the parish of Beade (Vigo). This tree is so typical that many locals have at least one planted in their gardens. The cultivation of cherry in Beade has been essential for the economy of lots of families from this parish. The most common variety is called picuda and is small, heart-shaped, sweet and very tasty.

The town of O Rosal, by the Miño River and bordering Portugal, has been home to Mirabelle plums for decades. This golden fruit arrived in As Rías Baixas from the Black Forest, in Germany, where has been produced since 1935. The Mirabelle plum, very similar to the plum, is a delicacy difficult to find outside Galicia due to its short duration as fresh product.