As Rías Baixas is the land of a thousand festivals and food is one of its main attractions. Of the 47 Festivals of Tourist Interest in Galicia, half of them pay tribute to the cuisine of the province of Pontevedra. Tradition, history and religion are present in the Rías Baixas list of events. You should not miss any of them!

The traditional dances of San Sebastián, in the town of Cangas, is the first event marked on the festival calendar, and it takes place in January. Madamas wearing beautiful dresses and handsome galáns dance in the atrium of the parish church of Aldán in a popular, traditional and spectacular event.

Traditional bands, “burials” of important figures and lots of imagination fill the Carnival in As Rías Baixas. Special mention deserve the Entroido de Cobres (Vilaboa), a colourful traditional dance, and the Xenerais da Ulla, who ride their horses through the towns in the north of the province wearing bright attires to fight a dialectic duel. 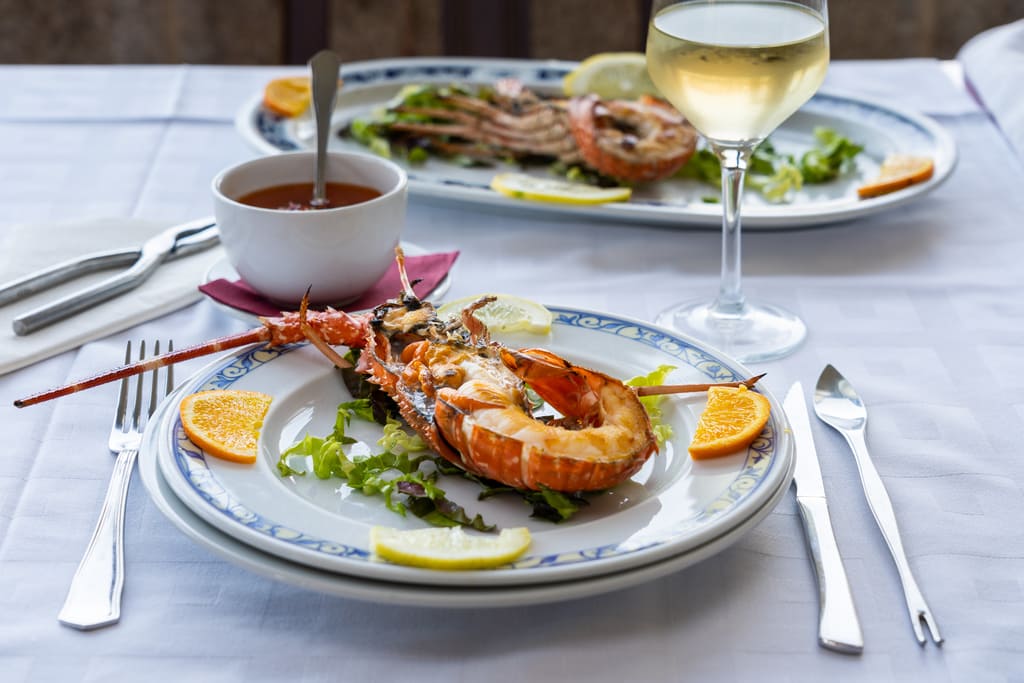 The town of Cuntis pays tribute to one of the winter products, the lacón con grelos (salt cured pork shoulder boiled with turnip tops and potatoes), the town of Pontevedra does the same with the broth of Mourente, Bembrive (Vigo) pays tribute to Saint Blas, e As Neves has a festival devoted to the requeixo con mel (cottage cheese and honey). Moreover, Tui celebrates the traditional feast of its patron saint, San Telmo.

The famous oyster from Arcade (Soutomaior) can be tasted in this town in April, which takes place in the same month as the Festival of the Millo Corvo (Black Corn), in the place of Meiro, in the town of Bueu. During the Holy Week, two important religious events are held. One in the town of Cangas, which stands out for its articulated statues, and another in Paradela, in Meis, featuring a re-enactment of some episodes of the Holy Week.

The lacón is, together with the cocido, the star dish in winter, whereas in summer, the majority of festivals offer sea products

The Corpus Christi is celebrated throughout As Rías Baixas. Of these feasts, it is worth mentioning, besides the one held in Ponteareas, of International Tourist Interest, the feasts of Bueu and the Festa da Coca, a combination of religion and legend, in the town of Redondela, both of Tourist Interest in Galicia. At this time of the year, one can also participate in the pilgrimage Romería das Pascuillas da Franqueira, in A Cañiza. At the end of the month, the Pilgrimage of O Corpiño is held in the town of Lalín. It is one of the last celebrations to be added to the list of Galician Festivals of Tourist Interest. Every June 24th, devotees from all parts of Galicia gather in the parish of Losón.

In the summer, the number of festivals increases. In July, some of the unmissable events are the Festa da Vieira (Scallop Festival), in the town of Cambados, Festa da Langosta (Lobster Festival), in the town of A Guarda, Festa do Viño (Wine Festival) in O Rosal and the Carneiro ao Espeto (lamb roasted over an open fire), in the town of Moraña. On their part, in July, you should visit the traditional religious feasts of San Benitiño de Lérez, in Pontevedra, and the Santísimo Cristo dos Aflixidos de Bouzas, in Vigo. On July 29th, the Pilgrimage of Santa Marta de Ribarteme takes place. This festival, one of the most peculiar religious celebrations in Galicia, is also known as the pilgrimage of the "undead", because the people who offer themselves to the Virgin go on parade inside open coffins.

In August, the largest number of festivals takes place. The Festa da Tortilla de Laro, in Silleda; the wine festival Festa do Viño do Condado de Tea, in Salvaterra de Miño; the Festa do Mexillón e do Berberecho (Mussel and Cockel Festival), in Vilanova de Arousa; Festa da Ameixa do Carril (Clam Festival), in Vilagarcía de Arousa; Lamprea Seca (dry lamprey) in Arbo, Festa do Xamón (Spanish Cured Ham Festival) , in A Cañiza; Festa da Empanada de A Bandeira (a typical Galician pie, usually with a savoury filling), in Silleda; Festa da Anguila and da Caña do País (eel and a type of local liquour), in Valga, are the food festivals held in this month. Other events that take place at this time of the year are the pilgrimage of the Festas do Monte, in A Guarda; the Malla Tradicional in Lalín,the dances Danza de San Roque in O Hío (Cangas); a festival which pays tribute to one of the most distinguished Galician bagpipers, the Festa do Gaiteiro, in Soutelo de Montes, and the river rafting festival Descenso Internacional do Río Miño, in the town of Tui.

September also brings important celebrations. Don't miss the medieval festival Feira Franca in Pontevedra; the beautiful traditional dances of Darbo, in Cangas; the colourful dances of the Danza das Espadas, during the festivities of San Miguel, in Marín; and the popular pilgrimage Romería da Virxe da Franqueira, in A Cañiza.

At the end of the year, you can also participate in important events. Some examples are the Festival of San Martiño, in Moaña, in November, where you can taste local wine in the furanchos (private homes where the surplus of homemade wine is served paired with traditional tapas), and the amazing nativity scene Belén de Valga, during Christmas, with 4,000 hand-made moving figures.

Mark these events on your calendar of must-visits, come, and enjoy the festivals in As Rías Baixas!