The flower from the East

Manor houses, castles, parks... The Route of the Camellia will show you true botanical paradises in the Rías Baixas. This flower from the East, introduced in the province of Pontevedra three centuries ago, can still be seen growing next to beautiful historic buildings and in public gardens. If you follow this route, you will have the opportunity to discover thousands of camellias boasting a great variety of colours.

As Rías Baixas is a sprawling camellia garden that puts on a dazzling display in the autumn, spring and especially in winter, when these trees are in full bloom. They accompany us as we stroll along the streets, squares and gardens, manor houses popularly known as pazos, castles and monasteries… We can say that the beautiful camellias are part of the history and culture of the province of Pontevedra. They are ornamental trees whose serene beauty catches the eye of the beholder.

Native to the East, they were introduced in Pontevedra in the 17th century from Portugal. They adapted extremely well to the cultivation conditions of As Rías Baixas: well-drained acid soils with a certain degree of humidity in the air. There are about 80 species and 30,000 different varieties, depending on the size, shape, colour, petals or leaves, among other features. We invite you to come and gaze closely at these delicate flowers and discover the unique beauty of each one – the beauty that is at once so inspiring and magical.

The flower from the East gives a touch of colour to the landscapes of As Rías Baixas. This flower is the main attraction of the gardens of the Soutomaior Castle, the gem of the fortified heritage in As Rías Baixas. In 2012, this botanical treasure was designated as International Camellia Garden of Excellence by the International Camellia Society, the first garden in Spain to receive such an award.

The garden boasts more than half a thousand camellias. The most outstanding specimens are the 19th-century specimens of Camellia japonica having the largest perimeter of Galicia, and the oldest in the park, growing next to thousand-year old chestnut trees. Other species, such as monkey puzzle trees, sequoias, bald cypresses, specimens of Abies pinsapo and Monterrey cypresses, as well as others from the five continents, also stand out.

A beautiful French-style garden welcomes visitors to this historical pazo in the region of Salnés. More than 4,000 camellia specimens are growing in the garden, which was designated International Camellia Garden of Excellence in 2014. One of the botanical gems of the garden are the group of 19th century camellias donated by the Duke of Caminha (Portugal). Today, the queens of the garden are about 800 varieties belonging to the species Camellia sasanqua , Camellia sinensis, Camellia reticulata and Camellia japonica that bloom throughout the coldest season of the year.

The estate has been dedicated to agroforestry cultivation since time immemorial and this knowledge has been passed down from generation to generation. Its outstanding camellia collection coexists with others species such as magnolias, incense cedars, Japanese red-cedars, eucalyptus, camphor, ashes, Araucaria species, as well as oaks and cork oaks , which make this place a botanical park perfect for a stroll.

In the very heart of the region of O Salnés, in Ribadumia, the Pazo Quinteiro da Cruz has originally French-inspired gardens boasting thousands of camellias. This garden, which was designated as International Camellia Garden of Excellence in 2018, has about 5,000 specimens belonging to 1,500 varieties.

The gardens, lined by vineyards of the Albariño grape variety and surrounded by native woods, include hundreds of specimens of Camellia japonica , C. reticulata and C. sansanqua . Several paths allow visitors to stroll among camellia trees and admire the beauty of the charming flower of As Rías Baixas.

In the outskirts of the town of Pontevedra is a magnificent example of a manor house dating from the late 19th century, now dedicated to forestry research and conservation. The Pazo de Lourizán has a lovely, large-sized garden containing rare botanical species like the Dutch elm, a magnolia-lined avenue, and a metasequoia specimen that had previously only been known in fossil form.

The oldest camellias are some specimens of Camellia japonica which date from the 19th century and give a touch of colour to the garden landscape, which boasts 6oo specimens of this species that bloom from November to February.

The Pazo Quiñones de León or Pazo de Castrelos, in Vigo, was built on the grounds of the old tower of Lavandeira (17th century). After belonging to different families, in 1924 it was donated to the people of Vigo. It comprises different areas: the rose garden, the French-style and the English-style gardens, among others.

Among the camellia specimens growing in the garden, it is worth mentioning the specimen of Camellia japonica known as "Methuselah of Camellias", growing next to the manor house, and the magnificent hedge made up of the cultivars 'Alba Plena', 'Bella Romana', 'Federici', 'Hagoromo', 'Herzilia II', 'Incarnata', 'Kellingtonia' and 'Pomponia Portuensis' of Camellia japonica.

This pazo is found in the outskirts of the town of Pontevedra. Archbishop Malvar commissioned the construction of the Pazo de Gandarón in the late 18th century. Since 1928, it has been the headquarters of the Misión Biológica de Galicia, a research centre belonging to the Spanish National Research Council. Fountains, ponds, the hórreo (granary house) and the chapel are part of the sign of identity of the place, which has preserved its original style.

The oldest camellias were planted in the 19th century by Jerónimo Malvar. Later, Cruz Gallástegui, founder of the Misión Biológica de Galicia, enlarged the collection, and in the last half of the 20th century Antonio Odriozola contributed greatly to the cultivation and dissemination of the camellia. The most important camellia varieties planted in the garden are the Camellia japonica ‘ Fimbriata Alba’, ‘Juan XXIII’ or ‘Prince Eugene Napoleon’ , which used to stroll along the streets of Pontevedra on the lapel of Antonio Odriozola's jacket.

In the region of O Salnés, in the parish of Meis, we can find another International Camellia Garden of Excellence: the Pazo da Saleta. This manor house holds one of Spain’s most important private botanical gardens boasting both native and exotic species from the five continents. Moreover, this English-style garden forms a part of the Les Belles Maisons, an exclusive collection of privately owned houses for special events.

The garden includes more than 300 camellia specimens that belong to Camellia japonica , C. reticulata and C. x williamsii . A chapel, a hórreo (raised granary), a manor house, a pigeon house, an oak wood, a pond and the Australian jungle make this one of the most special gardens in the province of Pontevedra.

Known as the “Galician Versailles”, the Pazo de Oca, in the town of A Estrada, is the oldest of the Galician pazos. The most important elements of the pazo are the Chapel of San Antonio; the manor house, with an imposing crenelated tower and several coats of arms; and the stunning gardens, consisting of hedges, balustrades and bridges, as well as two large ponds representing virtue and vanity.

In the geometric garden, there is a specimen of Camellia reticulata ‘Capitain Rawes’ with deep red flowers. It is about 170 years old and 11 metres tall, and so it is considered the oldest and largest camellia tree in Europe. It is indisputably the crown jewel of camellias in As Rías Baixas. This garden also has hundreds of camellias of different sizes, species and colours that catch the eyes of those who visit the garden.

In the very heart of the city of Vigo, we find the park of O Castro, a true botanical garden which offers excellent views of the port and the ría (coastal inlet). It boasts a great variety of exotic plant species of great ornamental value and size. There is also a pre-Roman hillfort settlement dating from the 3rd to the 1st century BC.

There is an outstanding camellia collection decorating the garden. They are scattered around the garden. Most of them were originated in Portugal; this is the case of the varieties ‘Dona Jane Andresen', ‘Angelina Vieira' or ‘Pomponia Estriata Portuensis', among others.

Pazo de Pegullal dates from the 18th century and is located in the municipality of Salceda de Caselas. This Galician manor house is surrounded by beautiful gardens, ponds and fountains. The coats of arms of the Correa, Mendoza, Quirós, Sarmiento and Sotomayor families stand out in the monumental entrance door of this magnificent manor house, which is the southernmost pazo of those included in the Route of the Camellia of the province of Pontevedra-As Rías Baixas.

The vineyards of Pazo Pegullal winery, which produces and sells its wines under the Rías Baixas Designation of Origin, can be found around the property. Moreover, the pazo also has kiwi plantations and olive groves. 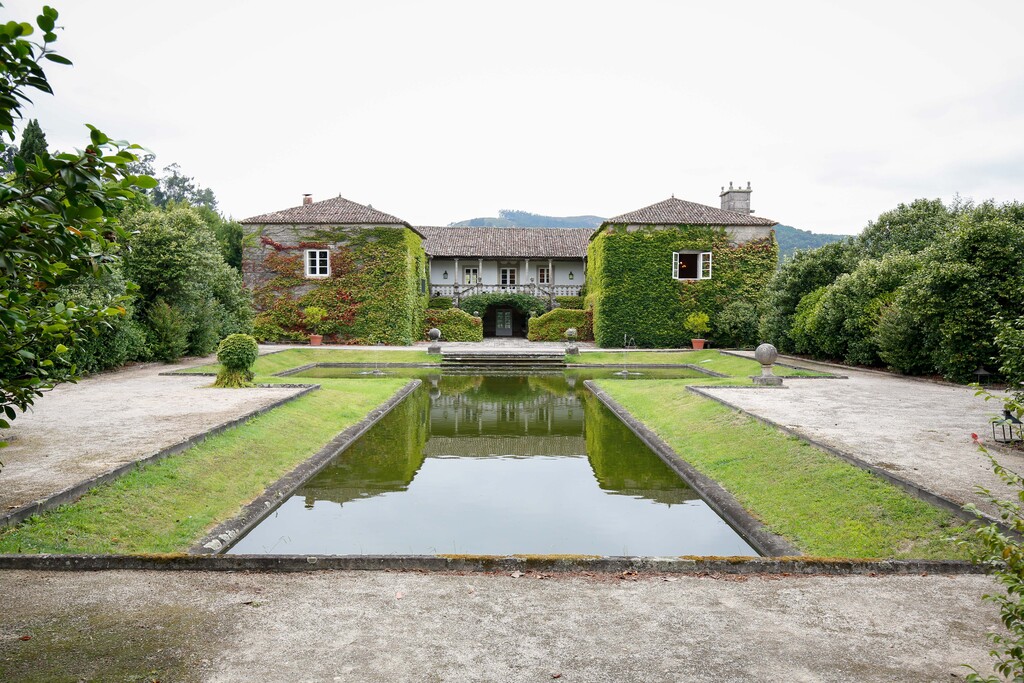